An Open Letter to Alibaba Because, No.

I don't follow the Nigerian stand-up scene with any particular ardor, but every time I've stumbled across Alibaba's work I've found it unimaginative at best. Still, because he is a pioneer(?) in the Nigerian comedy environment, he continues to have clout in the entertainment industry that allows him to be described as a celebrity, and like all celebrities, he has a following. I really wish Nigerian celebrities wouldn't generate so much social media nonsense (remember when Toke felt the need to make this joke?) because people take celebrities seriously. Nothing reinforces a shitty worldview like having some famous person reiterate it (just look at this Tyler Perry mess), and that is a major part of why this tweet which made it's way onto Linda Ikeji's Blog (Linda oh Linda!) was particularly grating: 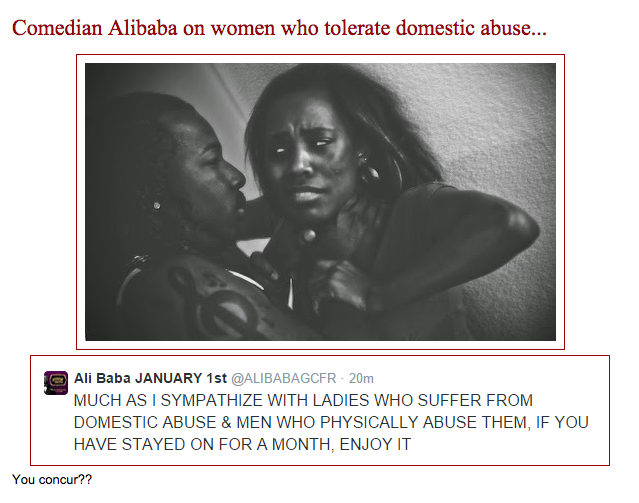 I therefore decided to write a response, not because I have any hopes that he will read it or that he is even interested in educating himself on domestic violence, but because I hope some of those hapless followers who take him seriously might find this somewhat enlightening.

Dear Alibaba,
This tweet is incredibly ignorant and dare I say, irresponsible. (It is also a bit difficult to understand because of the strange and somewhat contradictory sentence structure, but I'm not your English teacher). Domestic violence is not a simple equation where a man threatens violence or is actually violent one time and you decide it is unacceptable and you leave. There are always, always, nuances and considerations and experiences that determine the way any human relationship will play out, and that includes abusive ones.

It must be said that telling women to leave (or, in your case, judging them for not leaving) has never been and will never be an effective way to discuss domestic/intimate partner violence. It is rarely ever that simple. There are emotions involved in any intimate relationship, and in abusive ones the normal healthy emotions like love and loyalty are often mixed with fear, self-doubt, crippling anxiety and loneliness - all of which are often deliberately planted by the abuser, and all of which make independent decision-making difficult, if not impossible. In any discussion or commentary on intimate partner violence, one must first of all truly empathise with the victims (please note the difference between 'sympathy' and 'empathy'), and consider that women dealing with domestic violence are limited in their choices by any number of extenuating circumstances.

For instance, there is the huge amount of pressure put on women by society to establish intimate relationships and keep them going. The burden for 'relationship maintenance' falls disproportionately on women, such that women are almost always considered culpable in the event of a breakdown of a relationship, no matter what leads to that breakdown. Women are expected to do whatever they must to 'find' a husband, then they are expected to do whatever they must to stay married. That burden is often worsened by the presence of children. Women are taught to take many different kinds of abuse in order to 'keep' their homes, and domestic violence is often described as par for the course and/or a phase that will pass as long as a woman does what she must to keep her man happy.

Women are often told they are overreacting or oversensitive when they report abuse to friends and family; I'm sure the trope of the weathered older wife who now knows how to 'manage' her husband, having triumphed over all of his failings, is one that is familiar to you. Our society has a tendency to shame women who fail to endure abuse for the sake of preserving their relationships, and one result of this is that women will lie about their abuse in order to protect their men and their relationships. Another factor that abused women must consider is the often significant difference in the earning power of men and women. Economic disenfranchisement, which makes women unable to sustain either themselves or their families without the help of the abuser, is often a major disincentive to women considering escaping abusive relationships.

Intimate partner violence is the worst kind of manipulation and entrapment that anyone can ever experience in a relationship. Abusers will do everything to gain the trust and love of their partners, then eventually begin to wear down their independence and self-esteem in a bid to establish their power over the victim and ensure that they never leave. Abusers are often charming at first, and because of how relationship maintenance is often marketed solely to women, many women feel obligated to try to 'fix' whatever is wrong when their partners 'change'. Abusers often take advantage of personal weaknesses, erode the victim's confidence in themselves and their ability to find help anywhere, and psychologically manipulate victims into dependence on them. In many cases, they will deliberately limit their victims' social lives by isolating them and/or misinforming their friends and family about the victims' behavior so that the victims are no longer seen as trustworthy or even stable. They may also remove their economic power by preventing them from working, sabotaging their jobs, or controlling their income by other means.

I will ask you to especially consider the fact that women are at the highest risk of being killed by their intimate partners when they leave, and that most victims are aware of this because abusers often threaten grave consequences, including death, should the women undermine their authority in any way. Consider that resources to rehabilitate, empower and restore abused women to some sort of healthy normalcy are very few and far between. Consider that abused women often have nowhere to go should they leave, and that their worries are often complicated by having children. Consider that most abusers, because of their sense of entitlement, will relentlessly look for and violently punish their victims for leaving, and very often end up killing them. Consider what it must feel like to have the man you love fluctuate between threatening your safety, your life, maybe your children, and being loving and generous and kind. Imagine how confusing and heartwrenching that must be. Consider all of these things, read this hashtag started by Beverly Gooden on twitter, and then look at that little tweet you just sent out, and see whether you don't want to kick yourself.

I know no one knows everything, but I think you owe it to yourself and to the people who take you seriously to arm yourself with knowledge before commenting on something as serious as domestic violence. Here's to hoping this tweet never repeats itself.