Tokstarr, or Toke Makinwa to the uninitiated (ahem), is possibly Nigeria's most ubiquitous media personality. Someone once said that she's like MTN: bright yellow and everywhere you go. I found it hilarious, if a bit harsh. I don't listen to radio, so I don't know what she's like, but I was wandering around on Instagram, and one of her photos is the whole reason for this blogpost. 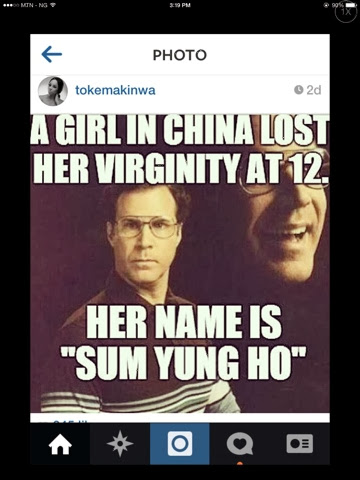 There's a lot I find very disquieting about the fact that this photo is on her Instagram. Here is a young woman with a significant following posting a (racist?) 'joke' about a 12 year old child having sex...and the punch line is that this child is a whore. To my mind, she must have first found it funny herself, for her to consider it appropriate to share.

Where to even begin?

I'm not Chinese, so I don't know if the play on their language would be considered offensive. But you don't have to be female, or an adolescent, to know that there is absolutely nothing amusing about rape, which is what any kind of sex involving a 12 year old child is.

More disturbing than the mere fact of Toke posting this picture was the sheer number of 'LOL'ers, many of them female, one of whom even took it upon herself to 'school' the lone woman who took exception to the 'joke'. 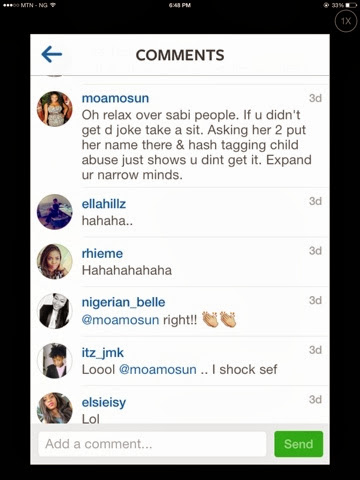 I've noticed that when people take exception to tasteless jokes such as this, they are invariably accused of being too sensitive, lacking humor, or having nothing better to do than make a fuss over nothing. But this isn't nothing. Rape isn't nothing. Paedophilia isn't nothing. Calling a girl (or any female for that matter) a 'ho' isn't nothing.

It wasn't long ago that Basketmouth got serious flak for posting a rape joke on his social media. I however find this joke even more distressing than Basketmouth's, because not only does it make rape seem okay, it goes further to shame the victim by calling her a 'young ho'. Add to that the fact that it was posted and laughed at by women, and one has to wonder just how much of a problem of internalized misogyny we have in Nigeria. I think it is important for any marginalised/oppressed/mis- or under-represented group to be careful about the messages they put out in the world. Having men misunderstand or make light of the very real, very serious issues women face is bad enough; should we have to deal with women doing the same thing too?

Last year, the Nigerian populace was outraged by the legislature's apparent attempt at legalizing child marriage in the country. I did a simple twitter search, and found Toke's thoughts on the matter. 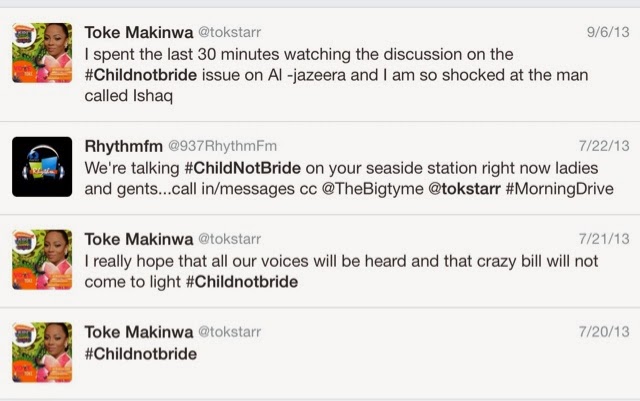 I wasn't surprised to note her own (mild?) outrage. I just have one question for Toke: are Instagram likes all it takes for you to change your mind about children and their sexual availability?
Posted by Unknown at 10:30