Depression Is Not A Bandwagon, and I Am Not Jumping On

Recently a friend said to me, "you have to show yourself the same grace you would show someone you love." It was a profound statement in many ways, not the least of which is how it highlighted the hardness with which I treat myself.

I've talked a little bit on here about not being able to deal with my grief over losing my mother and unexpectedly becoming a mother myself in almost the same breath, and my unhappiness, fascination with (my own) death as well as my inability to cope with my life are things that have come up as well, but I've never really considered that my emotional state might be deeply unhealthy. It certainly never occurred to me that I might be depressive. It just wasn't...me.

In my head, depression was (is?) this major thing that happens to people with legitimate reasons for having it. I've never felt like I had a right to my own unhappiness, and I've certainly never figured out what to do with it. I'm a happy person. I make people laugh. People love me. I meet strangers and they say things like, "oh, you're the Timehin!" I'm the one dancing until five a.m. in the highest heels with no alcohol keeping me going. I'm the usually quite successful people-pleaser. I smile at strangers and make small talk with bus conductors. I'm a happy person.

And yet, more and more often, for longer and longer periods, I really just want to escape my life. Maybe even die. Getting out of bed is so hard that I don't do it. I've lost so much weight over time that I'm actually smaller now than I was before I became a mother, because eating is not something I think about or generally want to do. There was a period when I felt crushing guilt every time I ate a meal, so that I would go for days without eating just to avoid that feeling. There are days when the weight of the 'I can't deal with today' is so great that I sleep till I make myself sick. There was a three-week period late last year when I almost never left my bedroom.

I had a nanny and so I would see my daughter first thing in the morning and last thing at night, with brief interactions whenever she bounced into my room, because I simply couldn't be around her. I felt like a horrible mother because not only could I not conjure up the energy to play with my child, I couldn't even be a decent human being to her. I couldn't smile at her, couldn't hug her, couldn't be patient with her. I had to stop smacking her because I realised I wasn't necessarily doing it because she was badly behaved, but because I was unable to process anything rationally. It took more energy than I had to be angry, and yet I was. I was furious when I wasn't despondent, I didn't know why, and I hated myself for it.

I felt like life was out to get me. I swung between black wells of despair and hopelessness and desperate attempts to 'fix' my life by changing my attitude. Yet, months later, no matter how the individual events that make up my days go, my overwhelming feeling is one of deep unhappiness and dissatisfaction. The prospect of social interaction fills me with dread, which is bizarre, considering how extroverted I am. It takes massive acts of will for me to choose to do things with people, even people I love very much. I've berated myself over my laziness, my apathy, my inability to simply pick myself up and make the most of my quite charmed life.

And yet, I found it a bit unsettling when I was talking to this dear friend about my general, constant, perplexing unhappiness, and she said, "girl, that sounds like depression." This conversation came on the heels of Chimamanda's much-talked about and unethically published essay on her personal struggle with depression, a link to which I tweeted rather cheekily: 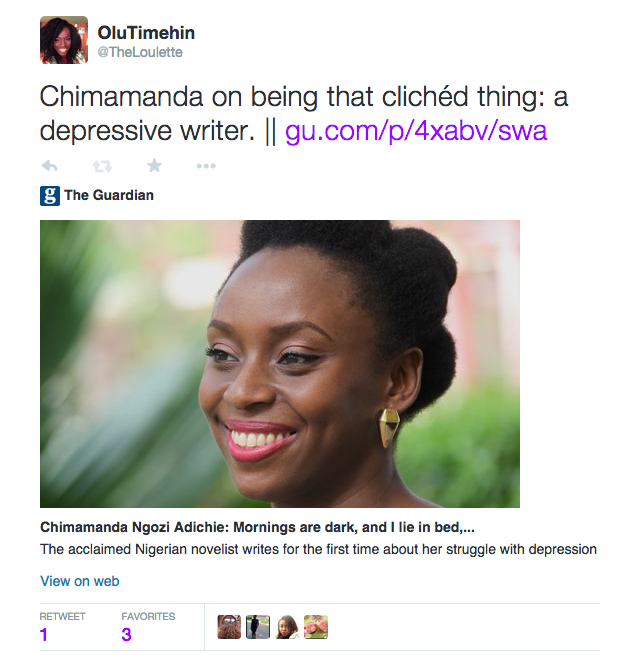 I had read the article detachedly, marvelling at the depth of feeling in her revelations, absently noting similarities, thoroughly enjoying her voice. Someone asked me later if I could relate, and I jokingly dismissed her. But during the conversation with my friend, she pointed out to me how everything I described seemed to indicate that I might indeed have depression.

I didn't know what to make of that. I still don't. I know how serious mental health is, and how we don't appear to know how to handle it; people always seem to either be claiming to have mental illnesses that they really don't because of a ridiculous desire to differentiate themselves, or they assume everyone who is mentally ill is unstable and violent, or they simply don't believe that mental illness is actually illness. I explained to my friend that I am loath to claim depression because I don't want to contribute to the faddish wave of buffet-style mental illness-havers; 'Oh, I'm a depressive creative type. Fifteen days a month, I simply can't function. It's what makes my art so poignant.' No.

But the truth is, there are times when I am 'not myself,' to borrow Chimamanda's turn of phrase. And it has been going on for a long time. I don't want it to continue. I need to figure out what it is that makes it so hard for me to function, and I need to fix it. And if that means that I might indeed be diagnosed by a professional as being depressive, then so be it. I won't continue to sacrifice my emotional and mental health or my relationships because I don't feel like I 'have a right' to depression. If it can happen to anyone, it can happen to me too. It doesn't make me any less me; if anything, facing up to the possibility will make me more me.

I miss the girl I used to be, the woman I know I could be if I could just get rid of this dark cloud hanging over me. I want her back. If facing up to depression is all that I must do to get her, then I'm doing it. Why wouldn't I?